Travelling from Lagos to Ibadan and vice versa just got boujee as new trains have officially opened up for commercial business!

The Nigerian Railway Corporation had initially done some free test rides in December 2019 but I couldn’t try it so I made sure i did when I heard they were operating once again.

I didn’t have enough information about the operations but I knew they left from Moniya, Ibadan to Lagos by 8am so I had to wake up super early because Moniya is at the outskirts of town. I’ve compiled the necessary information you would need to make the trip:

2. You purchase your tickets at the station and you need a valid means of ID to get one.

5. Current duration of journey is 2 hours 40 minutes because they are not running on full speed yet. Once they run on full speed, it would only take 1 hour, 20 minutes.

6. They are currently doing just one trip per day. During weekdays, they take off from Ibadan to Lagos at 8am and return by 4pm but on Saturday, they leave Lagos 8:30am and return from Ibadan by 6pm.

7. There is only one stop in between for now and that’s at Abeokuta. They pick people at the Abeokuta station on the way to Ibadan and Lagos.  They would have other stops once they finish construction and structuring.

8. The train is fully equipped with AC, Toilets, Charging Spaces and Television.

9. The terminals are still under construction especially the one at Moniya, so people have to wait outside after buying tickets before they board the train.

10. This is not the permanent schedule yet hence there should be changes in 2021.

This was my first train experience and I loved it. It was convenient and exciting and I’m happy at this development in our country. However I personally think the least fares are a bit pricey and I hope that the trains are maintained properly.

The Current Pros and Cons of The Ride 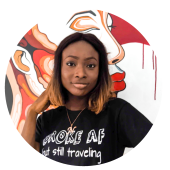 Two concepts I fancy are, ‘Art and Nature’, so getting both of them in one place was simply amazing! Thanks to the Gallivanters Traventures for hosting me on a two-day Osun Trip where we stayed over at Nike’s Guest House, Osogbo. My namesake, Mrs Nike-Davies-Okundaye a renowned artist, adire maker and owner of the famous […]

If you are looking to get a short let apartment in Lekki, Lagos or anywhere in the world for that matter, there are some things you must look out for, in order that your time there will be worthwhile, and also for you to get the best value for money paid. Below, we list the […]

If you are looking for the best luxury short let apartments in Lagos, this is the article for you. And as a sweetener, we’re including the most exquisite restaurants around them, so you’ll see that you’re truly in for the time of your life when you choose to stay in any of these stunning 5-star […]

Lekki Conservation Centre is undoubtedly one of the most popular destinations in Lagos State possibly because it houses the longest canopy walk in West Africa. Because of its popularity, I didn’t need to do so much research about the place. I already knew the costs and everything to expect (so I thought) hence I dragged […]

PLACES TO SEE IN LAGOS STATE

You would agree with me that people are always looking for spots and destinations to visit in various states hence the reason for my ”Places to See” Series. This is the first in the Series and it was first published on my Instagram page. I would be listing some places to see in Lagos State […]